Many, but not all, people with Down syndrome develop Alzheimer’s disease when they get older. 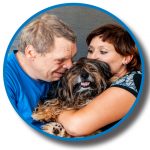 People with Down syndrome are born with an extra copy of chromosome 21, which carries the APP gene. This gene produces a specific protein called amyloid precursor protein (APP). Too much APP protein leads to a buildup of protein clumps called beta-amyloid plaques in the brain. By age 40, almost all people with Down syndrome have these plaques, along with other protein deposits, called tau tangles, which cause problems with how brain cells function and increase the risk of developing Alzheimer’s dementia.

If you suspect the changes you are seeing in your loved one are due to Alzheimer’s Disease:

10 Early Signs and Symptoms of Alzheimer’s

Guide to Ds and Alzheimer’s

It is helpful to understand and document what your loved one was capable of doing when at his best, using it later for comparison when changes start to occur. Document baseline adult function by age 35. The Dementia Screening Questionnaire for Individuals with Intellectual Disabilities (DSQIID) is a valid, reliable and user-friendly observer-rated questionnaire for screening for dementia among adults with Down syndrome but should be used before changes are noted to determine baseline functioning.

2. Rule out all other causes of symptoms including, but not limited to, thyroid function, sleep apnea, depression, celiac disease, B12 deficiency, and infection.

3. Seek an evaluation. Your family doctor may give you referrals to the following: a gerontologist, neurologist, psychiatrist or neuropsychiatrist with experience assessing individuals with intellectual disabilities. See http://www.theupsideofdowns.org or https://www.alz.org/cleveland for referrals if needed.

If an Alzheimer’s diagnosis is confirmed:

Plan for your loved one and yourself –

NDSS, NTG, and the Alzheimer’s Association have issued a new booklet on Alzheimer’s Disease and Down Syndrome

The US. Food and Drug Administration has not approved any drugs specifically for individuals with Alzheimer’s and Down Syndrome. Research trials are available in our community and nationally. For more information see the Linda Cirnic Institute for Down Syndrome, the LuMind Foundation  and The National Institute on Aging.